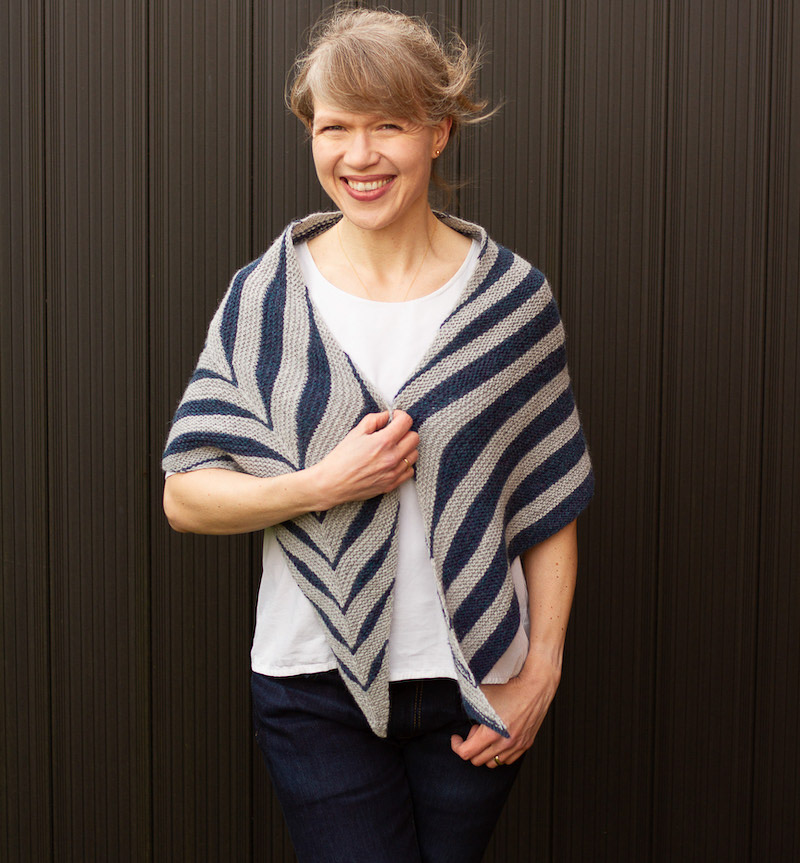 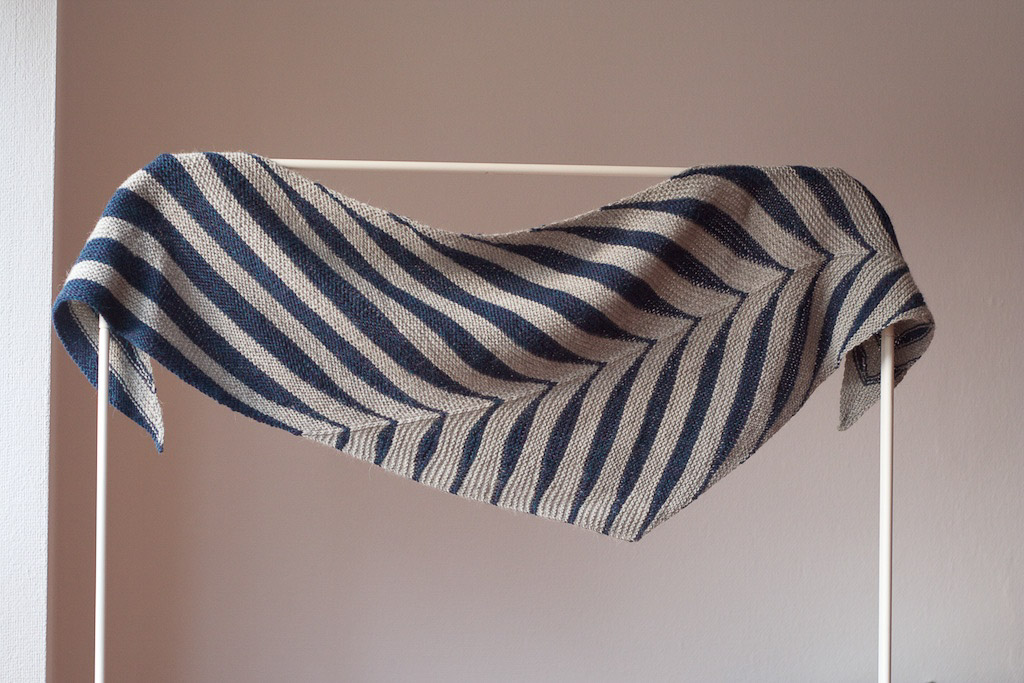 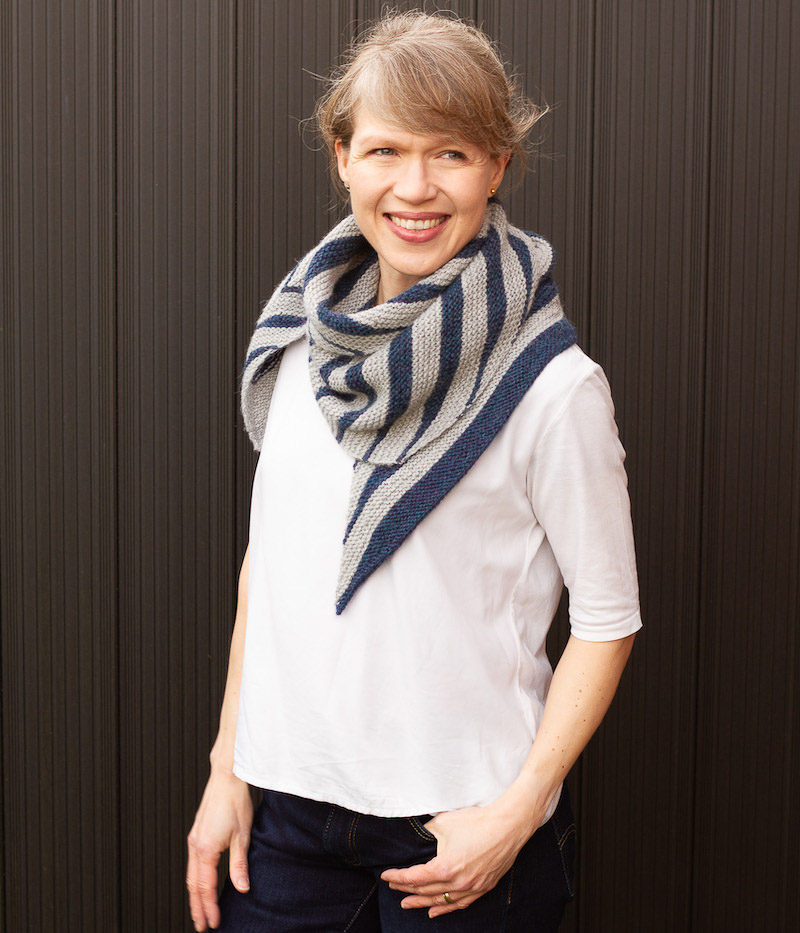 One night I watched an Episode of “Sherlock” – it was the one in which Mr Watson has a wife, Mrs Watson. She was wearing a dress with an allover-leaf-pattern that served as an inspiration for this shawl. Its construction was, when I designed it in the beginning of 2015, completely new. It was part of a collection for the yarn company Berroco who published it in June 2015. In the meantime, I had used this new construction for the Strickmich! Club pattern “Thousand Tulips” and “Match & Move”. I must say, I am a little bit proud of myself: This construction, that has inspired so many, was invented by me. Mrs Watson is knit out of a super-soft Alpaca yarn and the pretty leaves are shaped by short rows – but don’t worry, you won’t have to pick up the wraps, so it’s a relaxing knit! 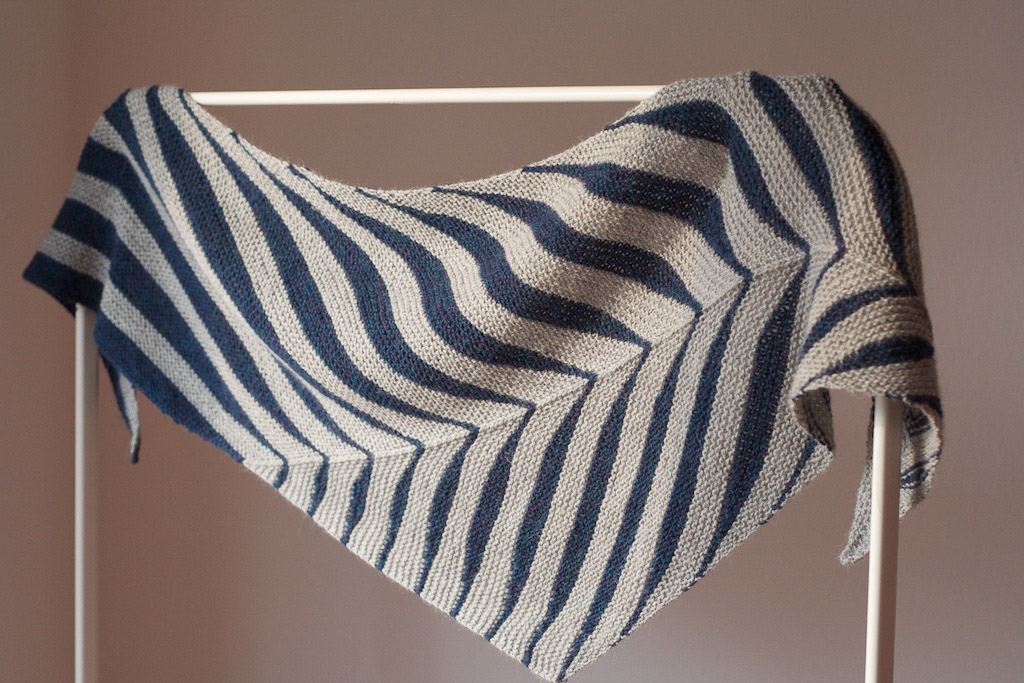 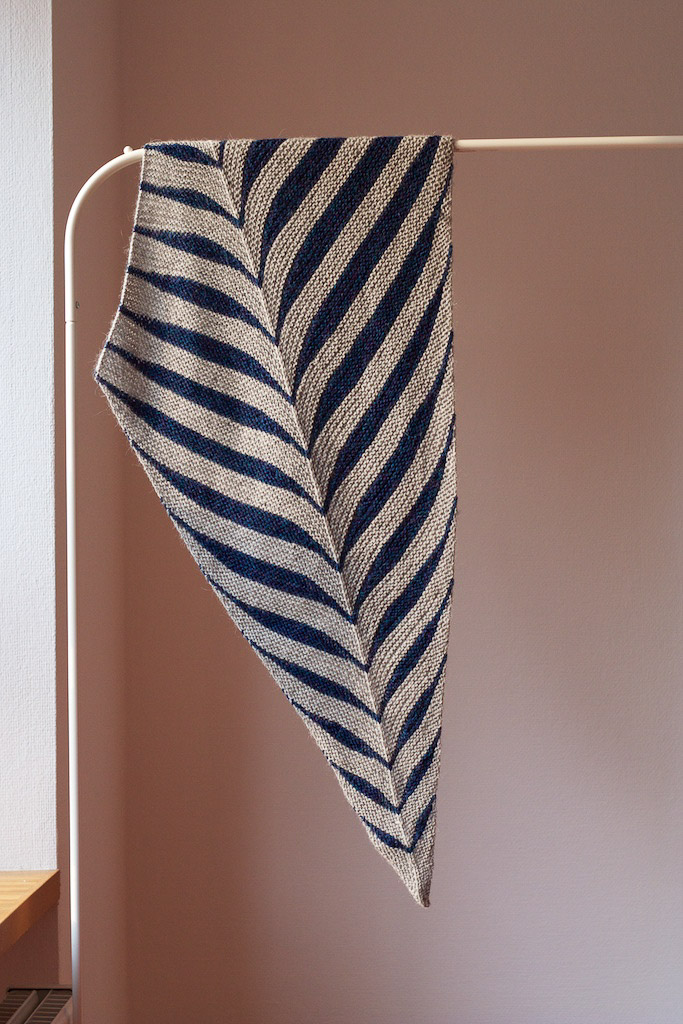 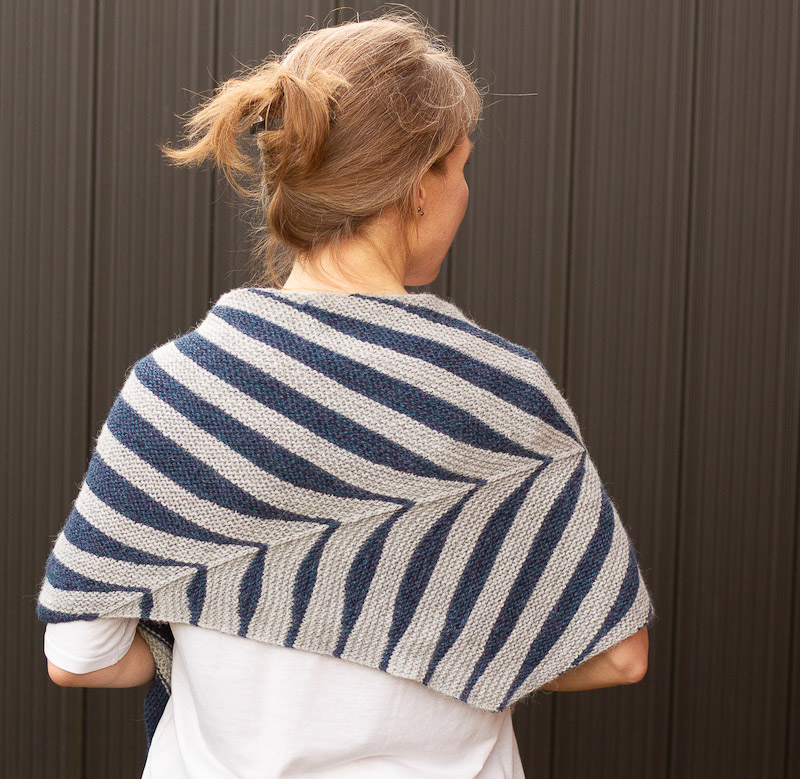 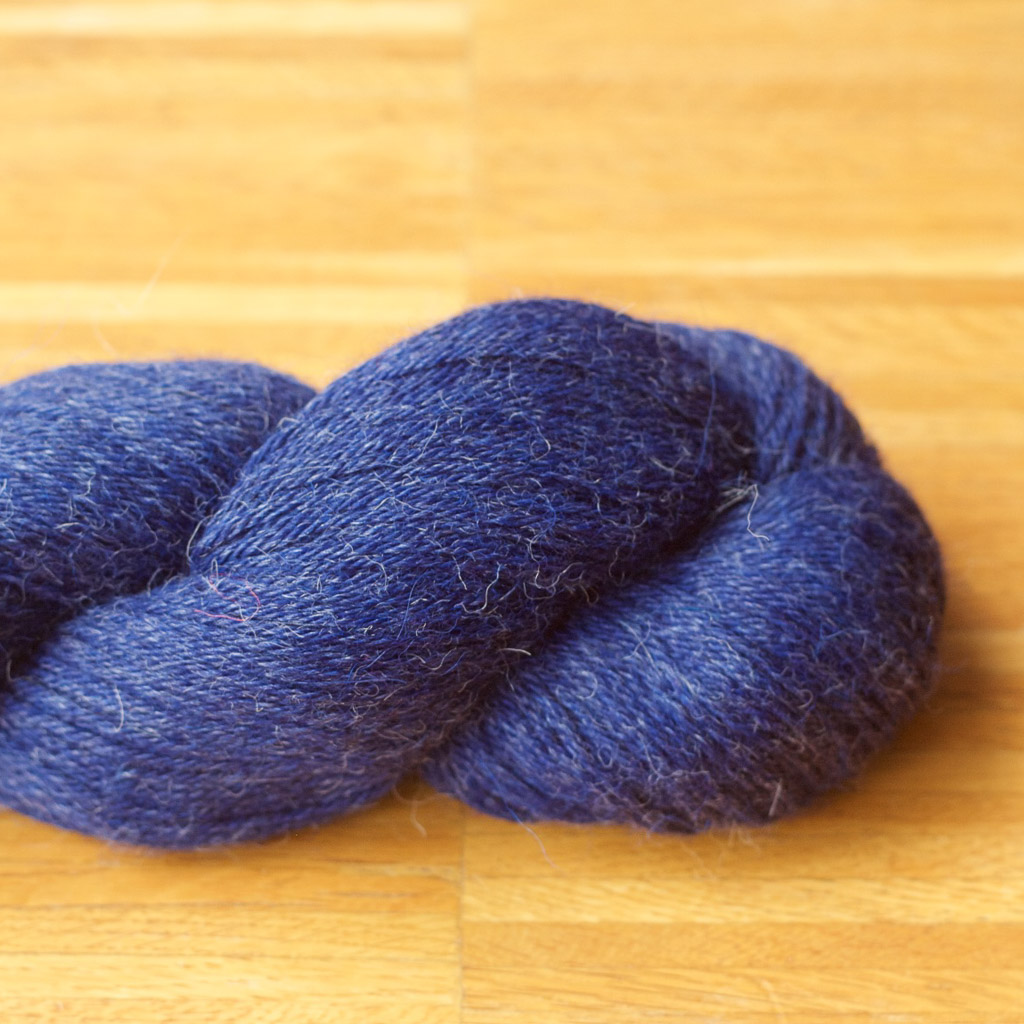 Amano Puna
Color Amano: 4006 Inkablau
Sustainable Softness from Peru Extra warm, extra soft and extra good for our planet – that’s the way we love a beautiful yarn, and the amazing alpaca yarns by Amano are just that! The fiber comes from cooperatives in Peru which employ the latest methods to ensure an animal-friendly environment and minimal impact on the surroundings. The high plains of the Andes are home to three and a half million alpacas. They have been living in this area for more than 5000 years and learned to thrive despite the rough climate and scarce food supply, earning their wool a reputation to be the most sustainable animal fiber there is. Alpaca fiber is significantly warmer than wool from sheep, it is very soft and has an attractive lustre – a dream for any knitter. It is processed by a spinning mill in the south of Peru to become one of the luxurious knitting yarns by Amano: blended with silk, merino or cashmere or pure as Baby or Imperial Alpaca in gorgeous, vibrant colors inspired by the textile traditions of South America.  Puna is made from 100% Baby Alpaca, yardage is about 250 meters / 273 yards / 100 g, so it's perfect for large but light, warm shawls like Naiada (two skeins of this yarn, colorway "Kornblumenblau"). The pattern is available here in our shop or in the book "The Hitchhiker Collection"  Martina has designed her knitting pattern "Loops" especially for this yarn.The sample "Loops" in our book "Strickmich! Knitting Inventions" was made out of two skeins of this yarn: One in Korallrot, the other in Bordeaux.
€19.90*
Details
Tip 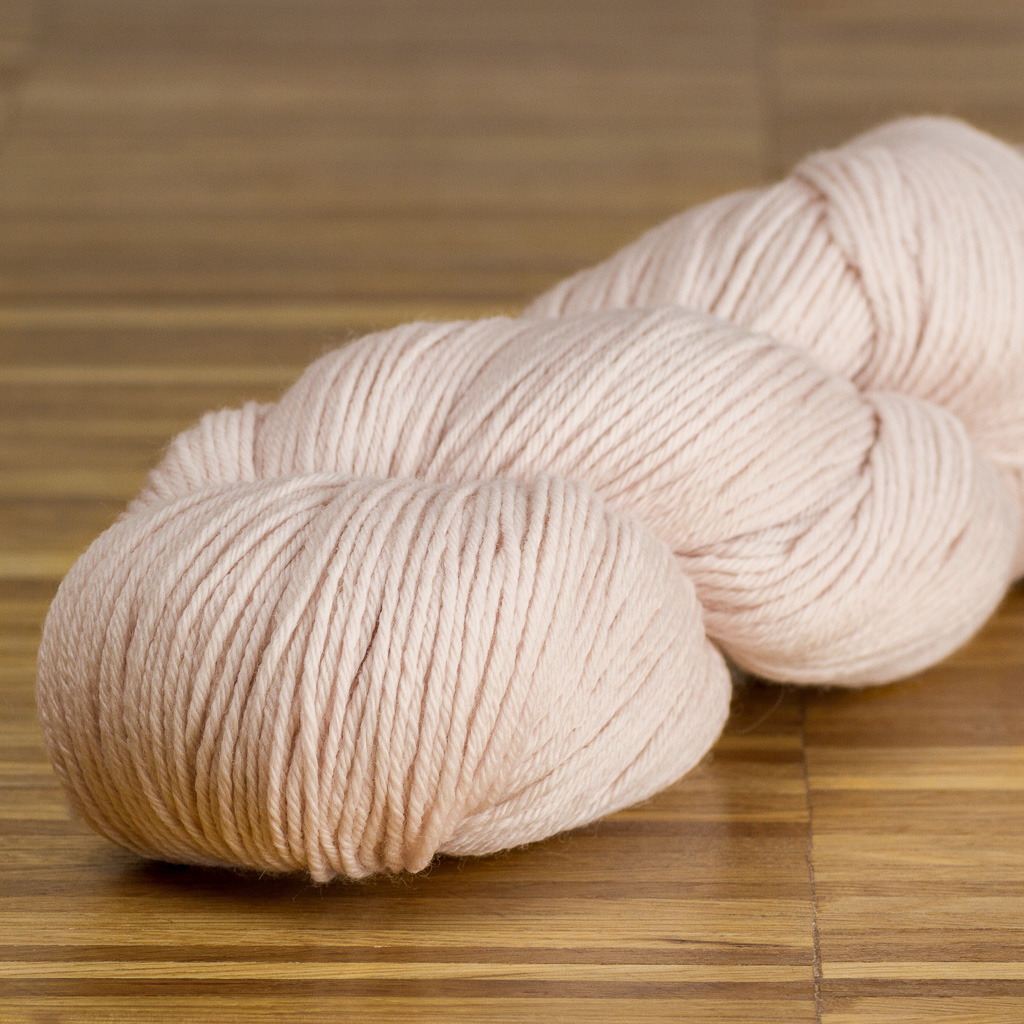 Rosy Green Wool Cheeky Merino Joy
Color Rosy Green Wool: 118 Sahne
This yarn is pure joy: 100% Merino superwash from Argentina, spun in a traditional mill in the UK, GOTS-certified (i. e. produced animal- and eco-friendly) – and soooo supersoft! I do not know many yarns that feel as good as this next to your skin – so it's ideal for shawls, hats and scarves as well as baby clothing. My patterns Matchmaker (DK-Version) and Naiada, as well as Braidsmaid, Heaven & Space, Buds & Bumbles and Brickless are perfect with this yarn, but also my hat patterns Tensfield, Langfield, Blunk the Hat turn out wonderfully in this yarn.The "Melange" colors of Cheeky Merino Joy by Rosy Green Wool have an interesting, almost rustic look to them – while being just as soft as their solid cousins! This is achieved by dyeing a part of the white merino fiber in a dark color before it is spun in to yarn. The colors that are dyed on the skeins will then have a beautiful heathered effect.The sample "Knitters DNA" from our book "Hitchhiker Collection" was made out of two skeins of this yarn, colorway "Sea Green". The sample "Rose Candy" from our book "Strickmich! Knitting Inventions" was knit out of 1 skein of this yarn in color "Eismeer" and 1 skein in color "Nachthimmel".  My patterns Obvious, Shore Hap Joy, Rose Candy, Shrug & More and Corners, Edges, Stripes were written specifically for this yarn.
€19.90*
Details

Circular Knitting Needle Addi Lace
Needle Size: 3,75 mm / US 5
Addi Circulars with 80 cm (32 in) length and extra sharp tips are ideally suited for most of Martina Behm's designs. These needles are great quality "Made in Germany", and they make even the most complicated lace pattern a pleasure to knit. The needle sizes are printed on the cable (metric and US). Addi lace needle tips are made from shiny brass and nickel-free.
Variants from €6.25*
€7.45*
Details 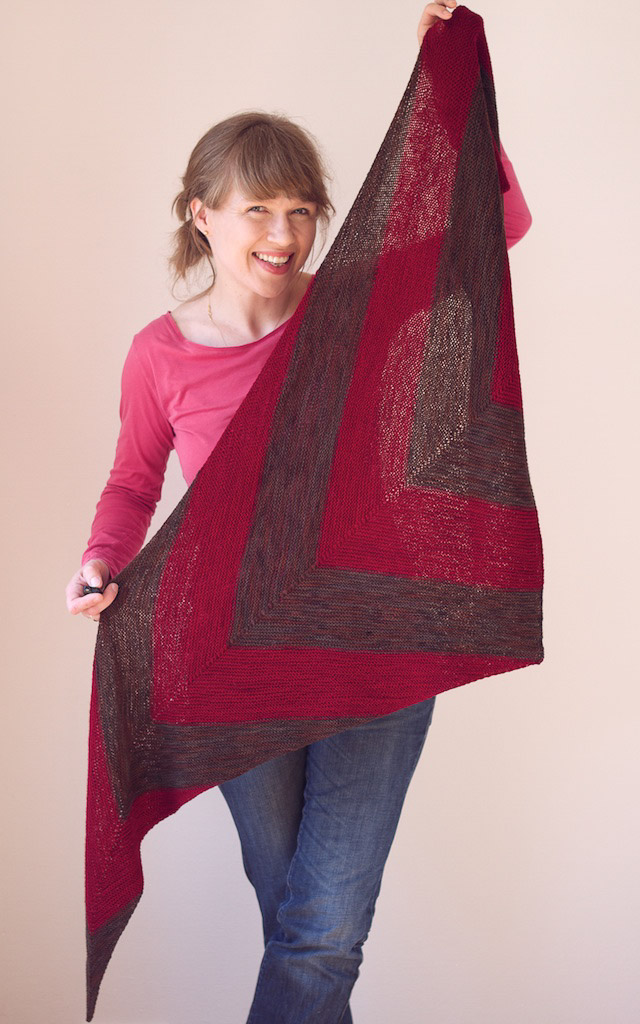 Match & Move
Formate: PDF Download | Language: Deutsch
I just love the “We’re Different”-Grab Bags from Rohrspatz & Wollmeise: Depending on which kind you choose, you will get a combination of a multicolor and a matching semisolid, hand-picked by the dyemaster herself, who has an unmatched sense of color. What shall I say? I was really surprised when I saw that she teamed up a softly variegated brown-grey with a bold and warm red. I just had to give it a try and get my knitting needles moving! So here’s “Match & Move”, a shawl designed to show off the perfect Wollmeise color combination and use up (almost!) an entire grab bag of yarn. My shawl weighs 286 grams. The unusual construction results in kinked stripes that look really interesting when you wear it. The knitting is plain garter stitch and very relaxing, and the shawl is so big and comfy, it is just a dream to wear. Definitely my favorite shawl so far – and I am determined to order another grab bag, be surprised and knit myself one more. Size of the shawl in the pictures: 200 x 50 cm (80 x 20 inches) 286 g of yarn (140 g of color A and 146 g of color B) Wollmeise Colors: Resi and Zimtapfel (both WD)The pattern "Match & Move" is part of Martina Behms book "Strickmich! Knitting Inventions".
€5.40*
Details 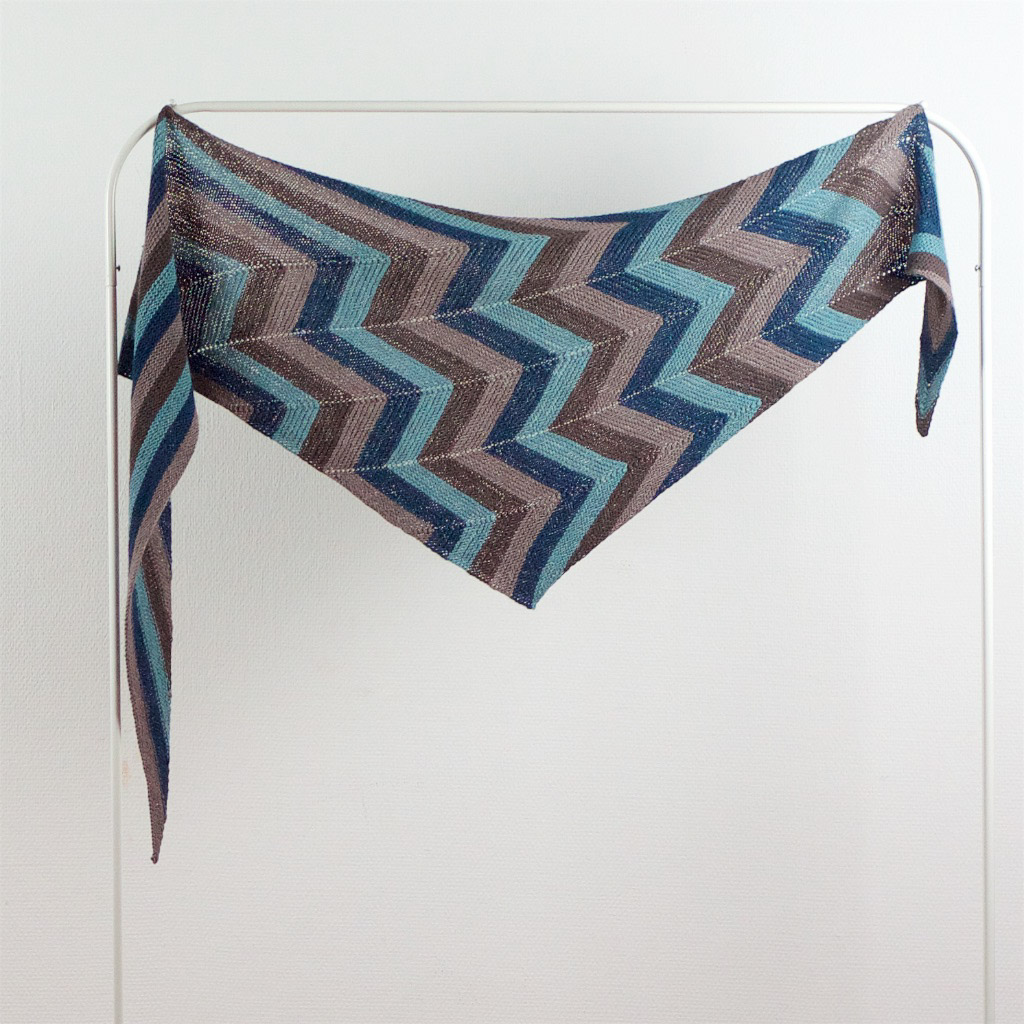 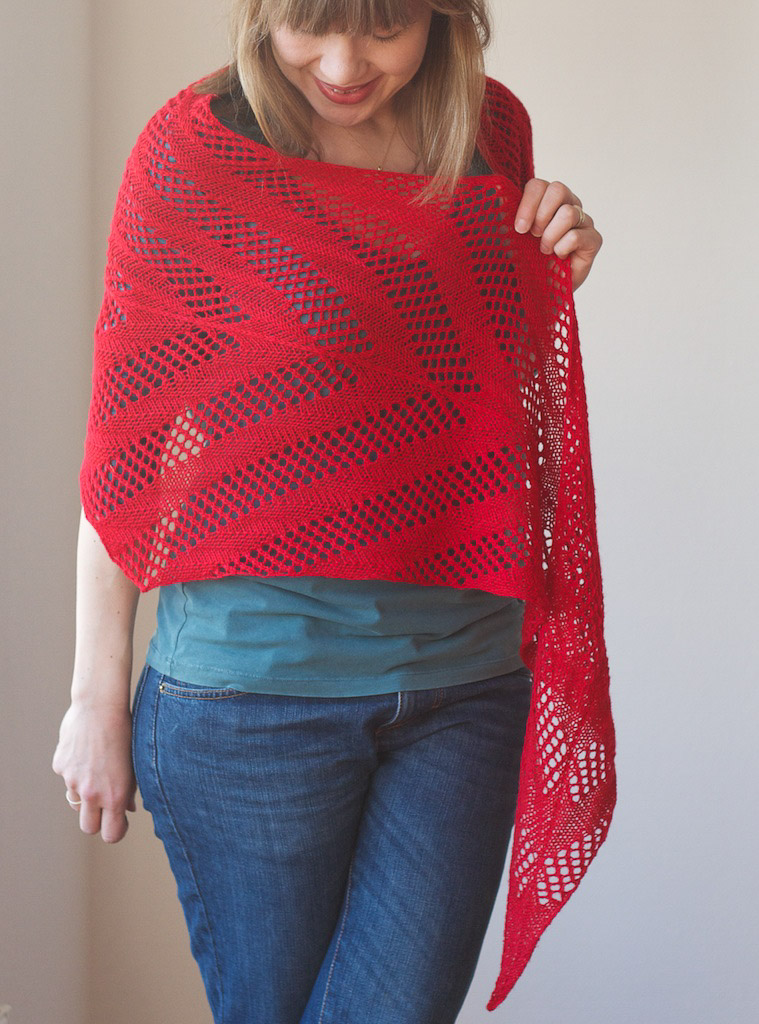 Thousand Tulips
Formate: PDF Download | Language: Deutsch
Tulips for the Tulip! Spring is close, and this shawlette is just the thing to get us in the mood: Unusually constructed, simple graphic lace in a bold color and a heavenly soft cashmere blend yarn. Watch stylized tulip blossoms evolve along the center spine as you knit. Fun, simple, and with a great result! The pattern is adaptable to the amount of yarn you have. The pattern is both charted and written out. Please choose your needle size according to your knitting style: Loose knitters: 3.5 mm - 3.75 mm Tight knitters: 4 mm Measurements of shawl in the pictures  Length 205 cm (82 in), Depth 43 cm (17 in)In this video I talk about the yarn and the design.
€5.40*
Details
This website uses cookies to ensure the best experience possible. More information...