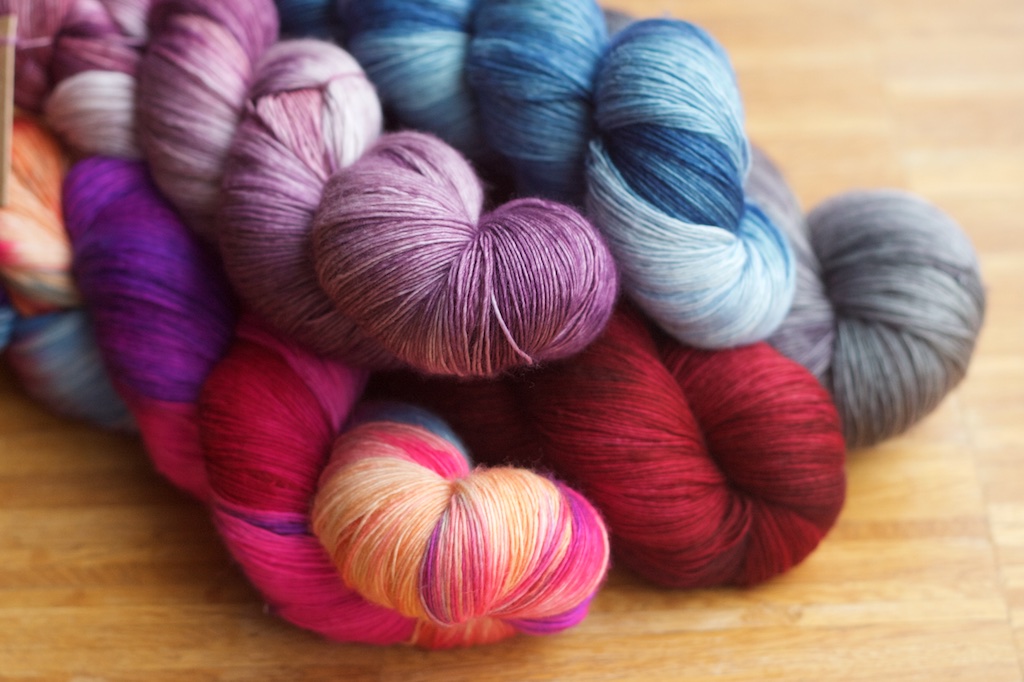 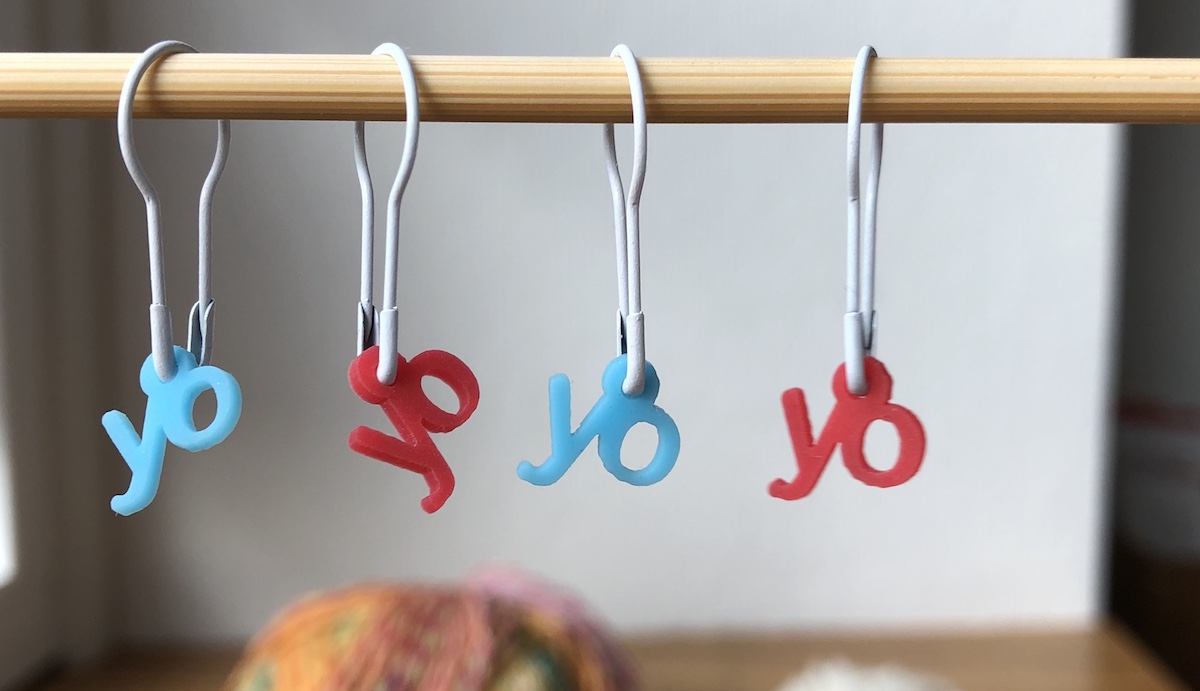 Show all categories More Yarn Back 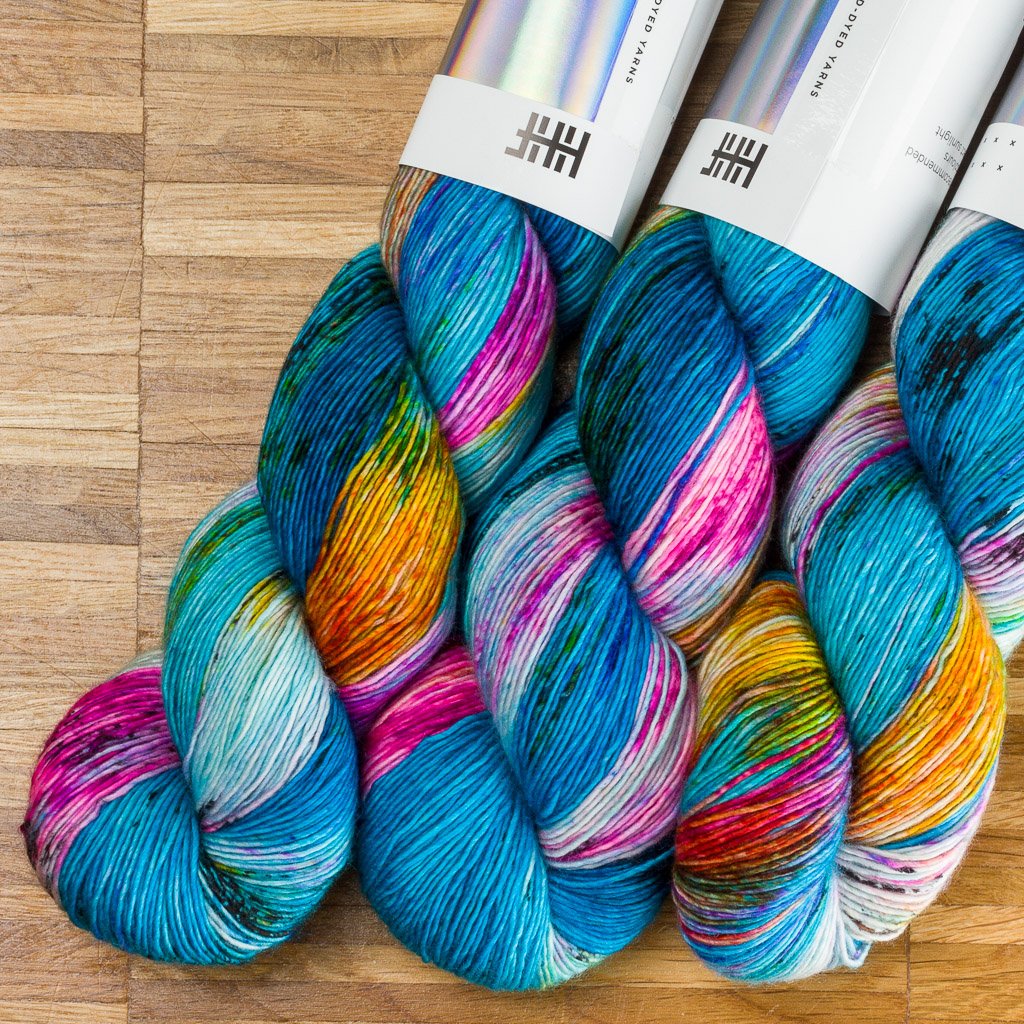 Product number: HHF101.DE
Variant: Deep End
Product information "Hedgehog Fibres Skinny Singles "
So cool, so colorful, so Hedgehog Fibres! "Skinny Singles" is the secret superstar in Hedgehog Fibre's yarn line-up: A fine single-ply that takes the creative colors of color artist Beata Jezek especially well. Spun out of superfine merino, it has a subtle luster to it, is super soft and very well tolerated even by sensitive people. With 366 meters per 100 g it is light, but with a nice volume to it and ideal for cowls and shawls. Martina has designed the third pattern for Strickmich! Club 2021 ("Aglaisio") with a special colorway of this yarn. 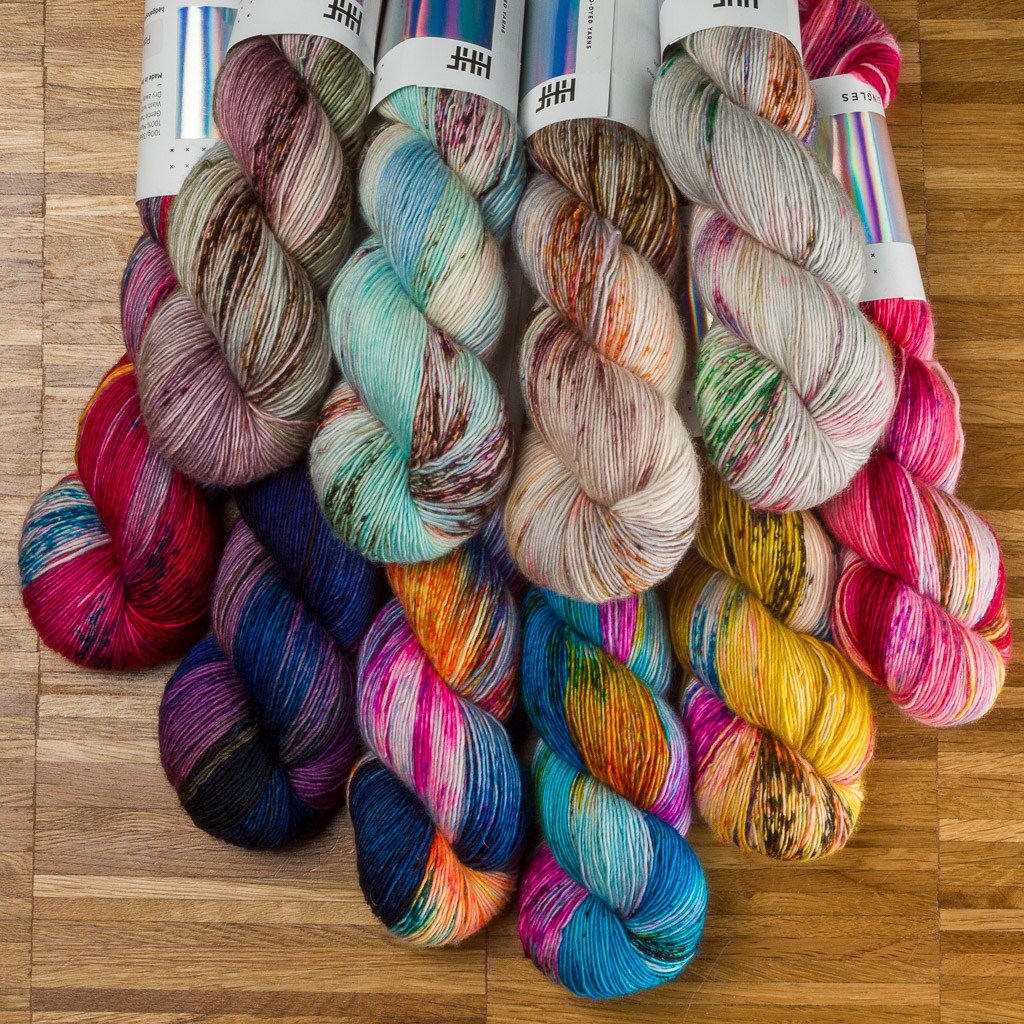 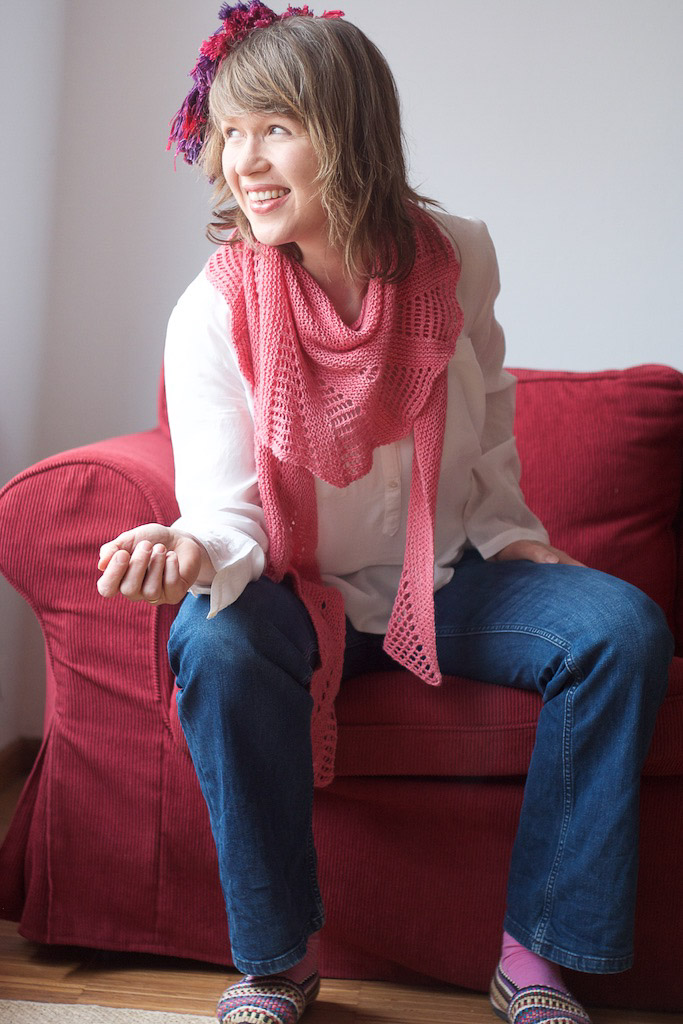 Bellrose
Formate: PDF Download | Language: Deutsch
First pattern from Strickmich! Club 2017.  She was known as fearless, she loved her freedom, her music and the stage: Janis Joplin. In the 60s, everything she did was revolutionary. She left Texas to sing with a band in San Francisco, she cried and screamed during her performances and became ecstatic when she saw people dance to her music. While other women of her generation still wore stiff hairdos and little pastel suits during their days at the office, Janis put purple feathers in her hair, threw on a gold-glittering crocheted vest, shook her hair and rocked the stage and the whole world of music. She sang the blues like no other. She was rebellious, free, feminine and incredibly talented – which makes her an inspiration up until today, more than 45 years after her death. When handdyer Danica told me she had named the color for this club shipment after a movie based on Janis Joplin’s life, I designed a shawl that would play with the elements of hippie fashion: Net lace in triangular shapes mirroring the bell-bottomed pants that were popular in that era – playful, but not naively nice. They are worked with short rows that are incorporated in the lace, easy to execute without wrapping stitches. A very relaxed knit in a beautiful, soft yarn – for the rebellious side in you! In this video I talk about the pattern:   Strickmich! Club 2017 Cast-on Event No. 1 from Martina Behm.
€5.40*
Details 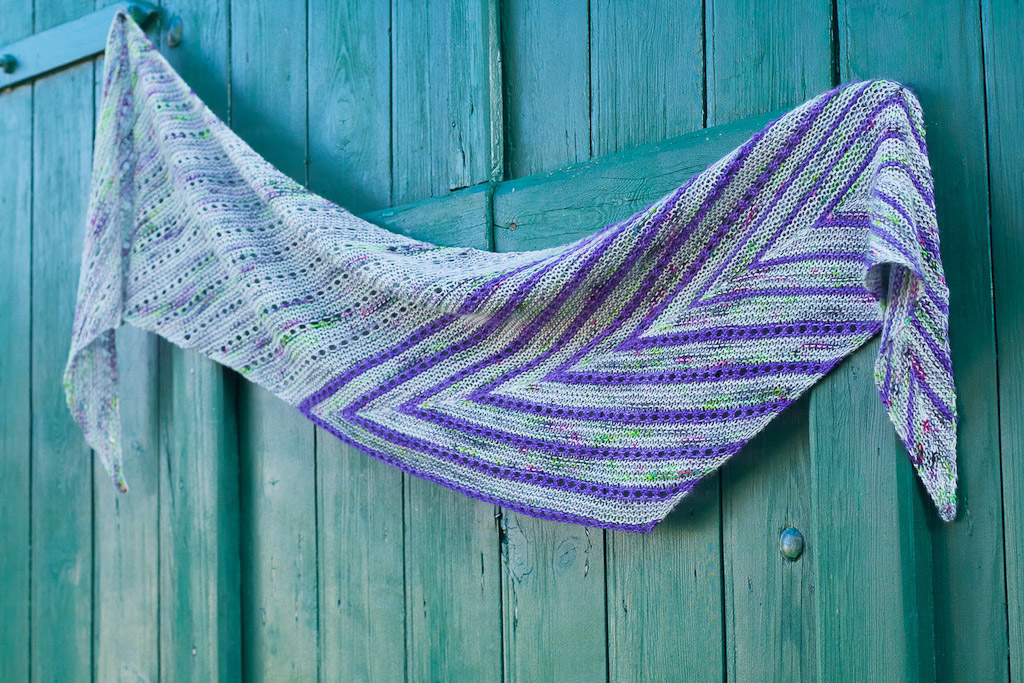 Plum Leaf
Formate: PDF Download | Language: Deutsch
Second Pattern of Strickmich! Club 2017 His music was unique, executed with perfection, sometimes it took a little to get used to, but some of it found its way straight into your ears and your legs: Prince. Was it rock or soul? Funk or pop? Probably everything all at once. He just did what he liked, and that included his stage outfits: Ruffles, suspenders, naked legs, head scarves, tailored suit – Prince did not care about any kind of stereotype. When he died in spring 2016 at only 57 years of age, the world lost one of its most inventive musicians. A man who showed us that the most impressive works of art are created outside the box. Prince was especially fond of the color purple: His most famous album was “Purple Rain”, and on every album cover, you could find artwork with at least a small element in this color. So maybe he would have liked the yarn of this club shipment as well: green and purple sprinkles on a silver-shimmering base combined with a glowing semi-solid purple. The “Plum Leaf” wrap also mirrors Prince’s love of paisley patterns which are derived from leaf shapes: Starting with an oversized stylized leaf, you will knit an asymmetric stole that lets the variegated yarn shine prettily. The yarn I used is "Aurora" by Das Mondschaf.
€5.40*
Details 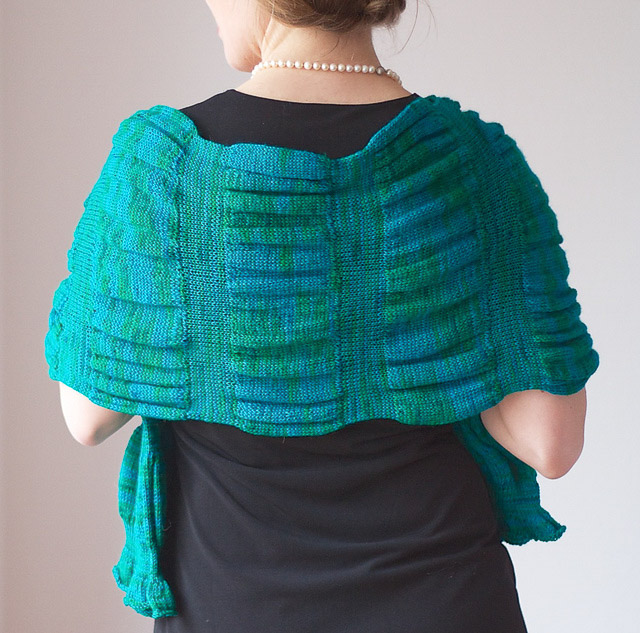 Rosen Bridge
Formate: PDF Download | Language: Deutsch
Looking for the perfect, elegant thing to go with the gown you picked for that very special night? Here it is: an opulent stole, like the ones Hollywood actresses used to wear in the 1950s. This stole will let you travel in time, but maybe not in space, like a real Einstein-Rosen-Bridge would (nerdy old me couldn’t resist another geeky pattern name). I designed this stole especially for one of those stunning, huge skeins of handdyed laceweight in a dazzling variegated color. These need a simple pattern to show off the beautiful dyejob and not distract from it. “Rosen Bridge” is 3-dimensionally constructed as a long tube and can be worn like a warm stole around your shoulders for just the right amount of warmth, but it also works as a voluminous scarf around your neck or as a big cowl if you open it up and pull it over your head. A fun, relaxing knit without a single stitch of purl, no special techniques required. It is so easy that even beginning knitters will find it enjoyable to make, and experienced knitters will appreciate its qualities on knit or movie nights.
€5.40*
Details 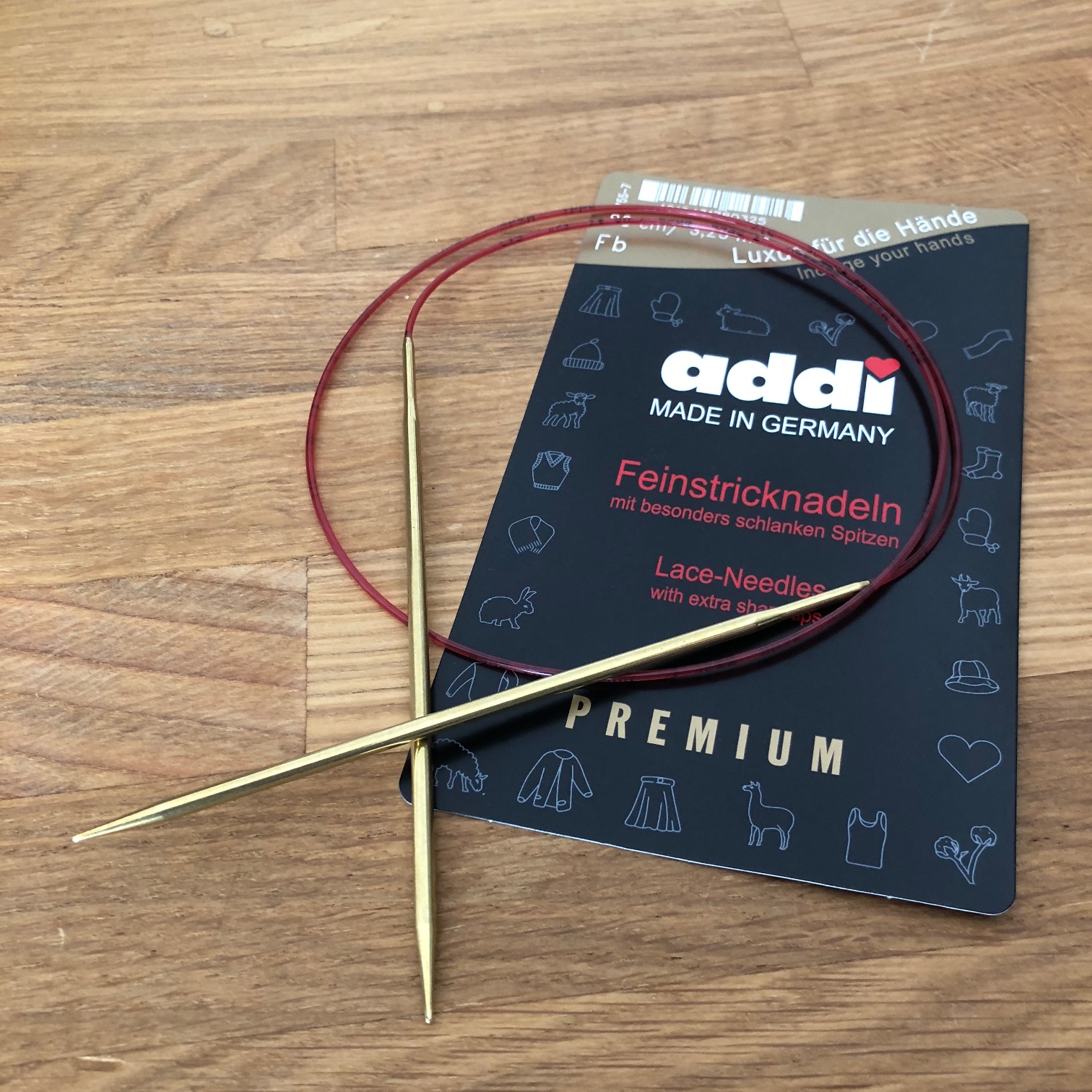 Circular Knitting Needle Addi Lace
Needle Size: 3,0 mm / US 2-3
Addi Circulars with 80 cm (32 in) length and extra sharp tips are ideally suited for most of Martina Behm's designs. These needles are great quality "Made in Germany", and they make even the most complicated lace pattern a pleasure to knit. The needle sizes are printed on the cable (metric and US). Addi lace needle tips are made from shiny brass and nickel-free.
€6.25*
Details 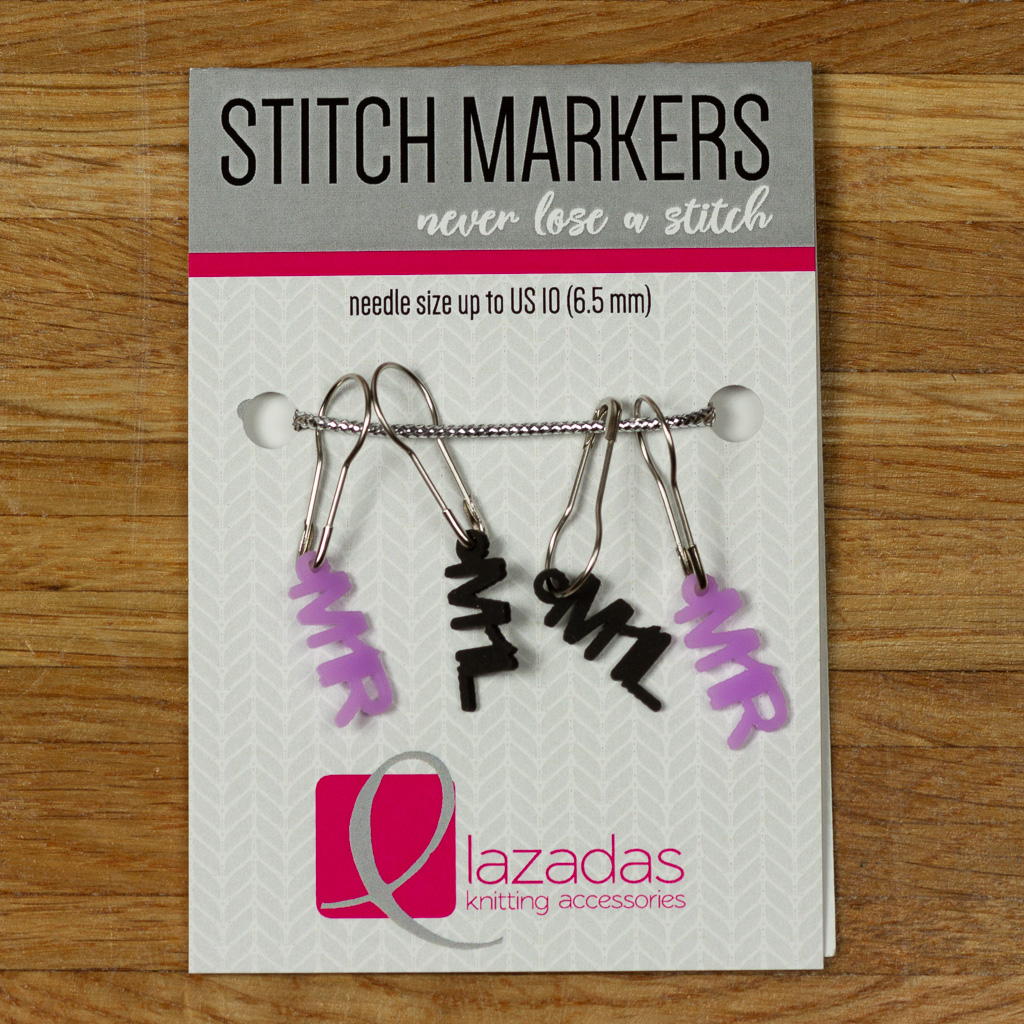 Lazadas Stitch Markers
Variant: M1R / M1L - schwarz / lila
These stitch markers can do more! They will not only remind you that you have reached a specific point in your row, but will also tell you what to do: knit 2 together, ssk, yarn over or m1. Also, they can be removed easily or placed in other places in your knitting as you please.  Metal/silicone. 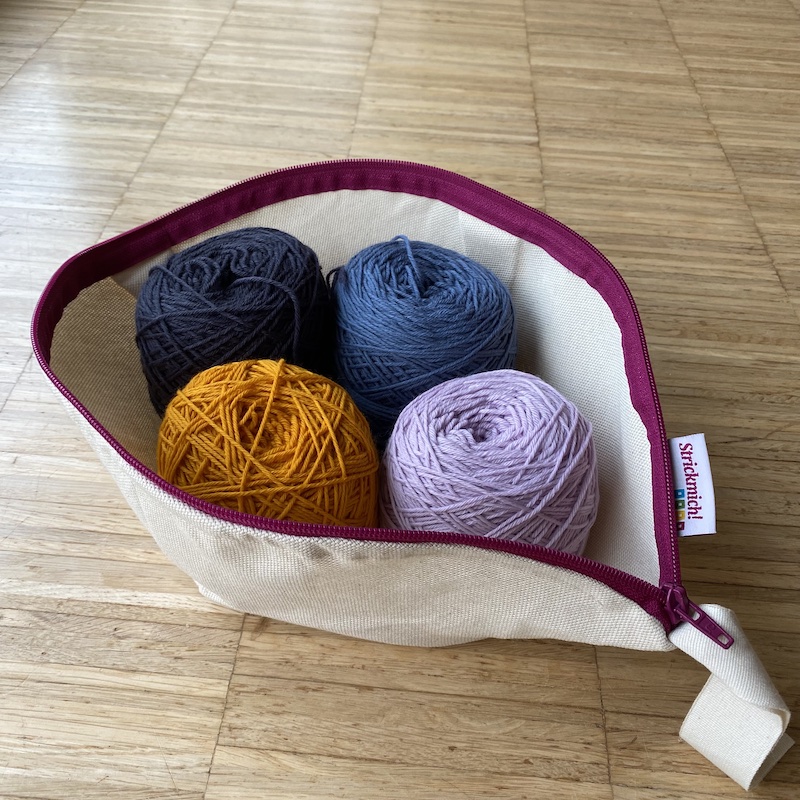 Strickmich! Big Bowl - your project bag
Strickmich! Big Bowl is the more voluminous version of her little sister, the Strickmich! Bowl Accessory bag: Open it up and it will expand to a useful bowl that holds your yarn balls when knitting. Sturdy cotton with a wool felt bottom protects your precious yarn, and knitting from it is a breeze. When you close it, you can carry it with the attached sling. Strickmich! Big Bowl holds 250 to 350 g yarn (on the ball or knitted) plus your needles.The smaller version (Strickmich! Bowl – accessory bag) is suitable for knitting accessories or small projects with up to 100 g yarn.The yarn and decoration in the pictures are not included. Strickmich! Big Bowl is sewn by Manomama in Augsburg, Germany after an idea by knitwear designer Martina Behm: Sturdy organic cotton fabric that will hold its shape and a reinforced bowl bottom with wool felt from German sheep who live in the Black Forest. The contrast-color zipper looks great with the Strickmich! logo tag and is made in Germany as well. Manomama is a project by Sina Trinkwalder, who established Manomama in the old textile hub Augsburg in Bavaria, employing people who find it hard to find work otherwise. Fair pay and good working conditions are an essential part of the project. Materials100% organic cotton from Tanzania, woven in Northrine-Westphalia, Germany, GOTS certifiedWool felt from sheep from the Black Forest, GermanyZipper made in Germany MeasurementsDiameter upper edge ca. 30 cmDiameter bottom 18 cmHeight of Edge approx. 13 cmLength when closed approx. 37 cmWidth when closed approx.  17 cm
€36.90*
Details Manos del Uruguay Marina
Color Manos del Uruguay: Martina´s Berry Pie
"Manos Marina" is a single-ply laceweight (100% Wool – Merino Superwash), very soft and light and just right for a beautiful shawl like Jasminde, Thousand Tulips or Lapislazuli. Martina has used this yarn for one of her Strickmich! Club designs and loved it so much that she suggested we carry it here the shop. Read Manos del Uruguays profile here on Martina's website.  The yarn is dyed in a women's project in Uruguay, providing fair working conditions and pay for women in rural areas.  This yarn proves that making the world more beautiful and a better place at the same time actually works!
€24.90*
Details 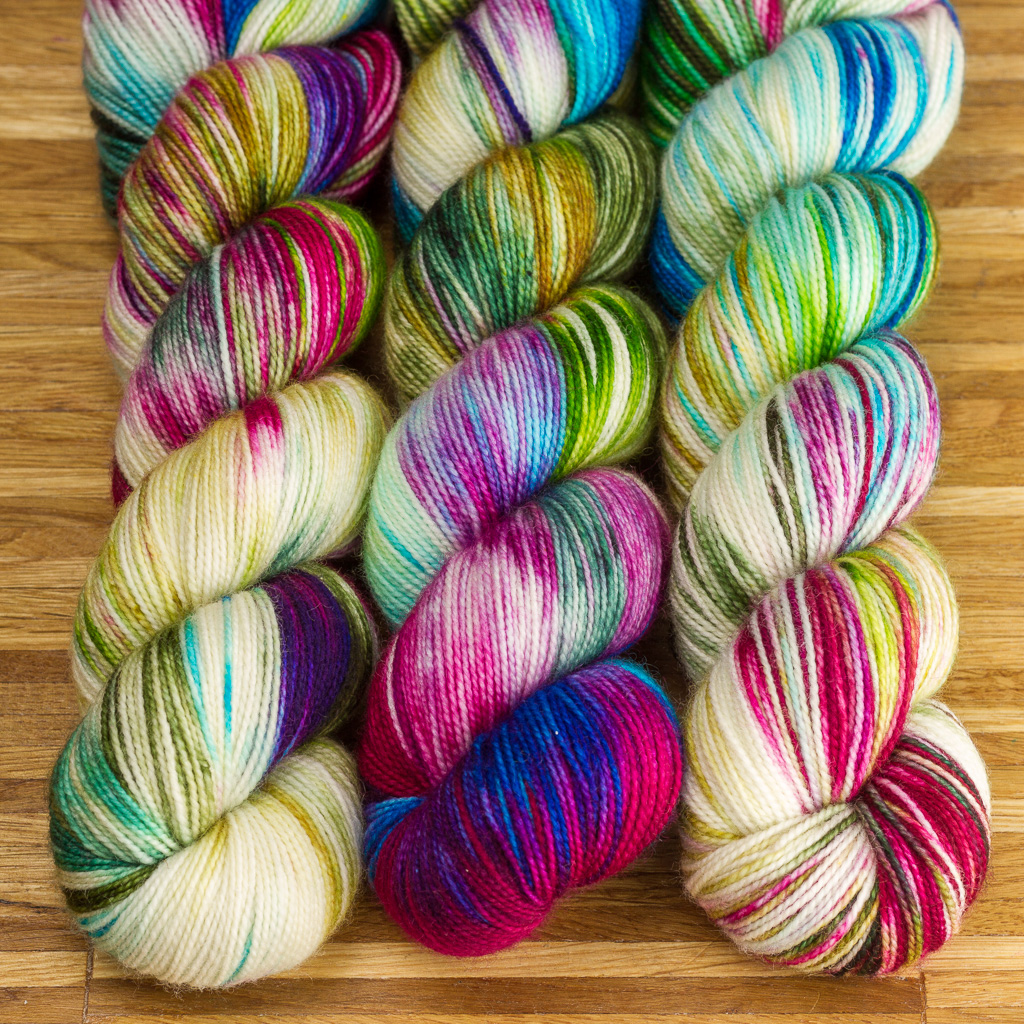 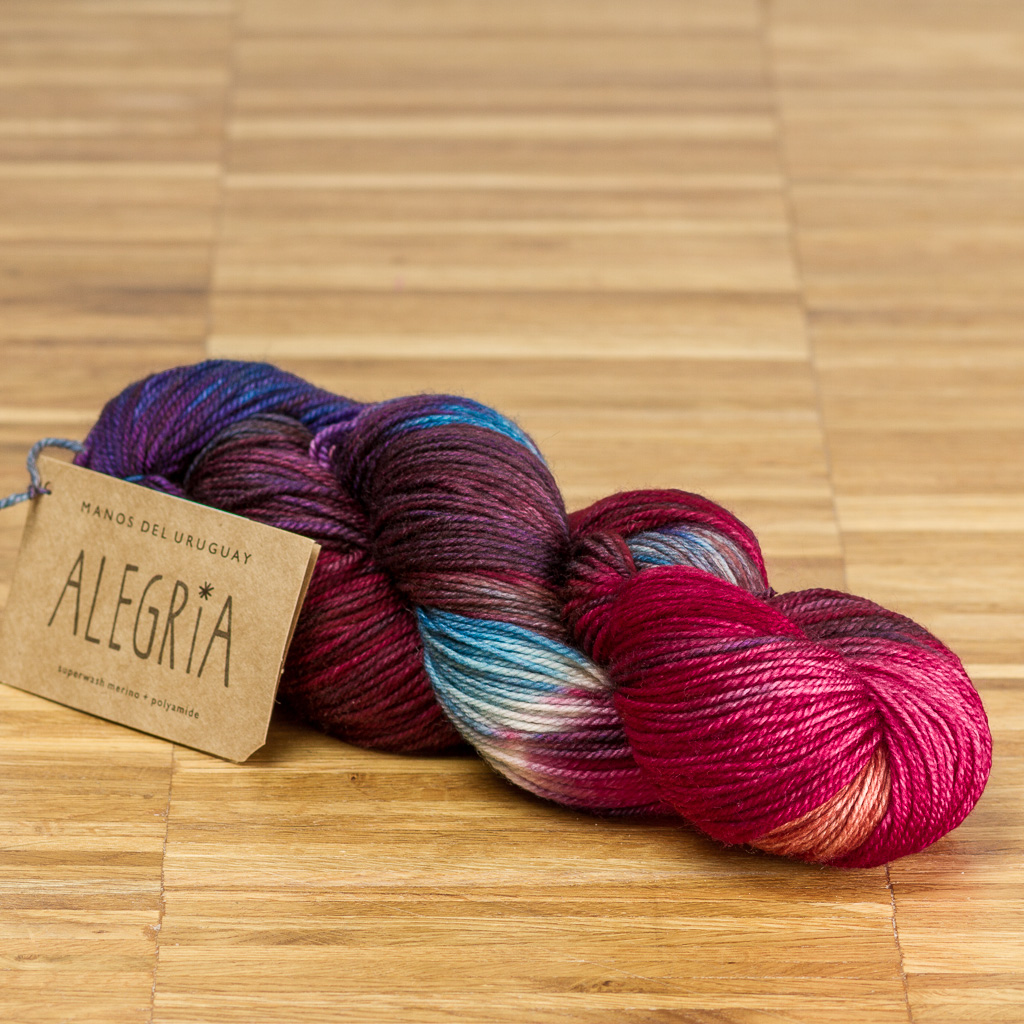 Manos del Uruguay Alegria
Color Manos del Uruguay: Tannat
Colorful, voluminous and happy – that's "Alegria" by Manos del Uruguay. With 25% polyamide, it is even durable enough for a pair of cozy socks. But the best use you can put a handdyed skein of "Alegria" to is to make a fun shawl like Hitchhiker, Hitchhiker Beyond, Easy or Puerto Montt – with its yardage of 445 yards per skein it's just perfect!The sample "Baltic Summer" from our book "Hitchhiker Collection" was made out of one skein of this yarn, colorway "Botanico".
€21.90*
Details
This website uses cookies to ensure the best experience possible. More information...